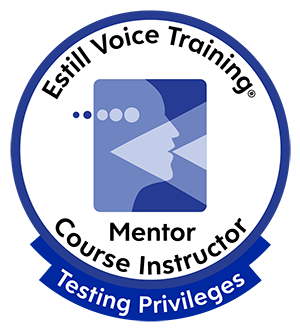 Judith
Dunlore
B.A., CMT, CCI
EMT: 2006
EMCI: 2008
Website: http://www.studiosingsingsing.com
Judith Dunlore is the director of Studio Sing, Sing, Sing, a West Coast center for Estill Voice Training. She is also active as vocal director for several of California Central Coast’s musical theater companies. She has worked with Chameleon Productions, Blue Room Productions and Clark Center of the Performing Arts on productions including “Sweeney Todd”, “Jekyl & Hyde”, “Little Women” and “Les Miz”. Ms. Dunlore balances a career of performing, musical direction, and teaching. Her performance experience includes soloist with Pacific Repertory Opera, City of Angeles Opera, Zurich Opera, concertizing and recording with the chamber ensemble Trio Musique. She founded and directed southern California’s well-known Lamplight Carolers, providing twelve to fifteen quartets of Dickens Carolers singing sparkling holiday music for almost twenty years. Ms. Dunlore has directed multilevel church music programs. She has been a voice teacher and coach at the University of Las Vegas, Nevada; California State University, Long Beach in the Master’s Conservatory Theater; and been the vocal coach for the All American College Singers at both Disneyland and Disney World. Judith Dunlore’s own vocal training includes study at the International Opera Studio in Zurich, and the Academy of Performing Arts in Vienna. She is now most excited at how Jo Estill’s research allows her to more accurately understand and explain the elements of singing she has been performing and teaching for years. She delights at how much more quickly the singers progress and how the Estill Figures provide so many tools for greater vocal control, artistic nuance, and stylistic freedom. Ms. Dunlore now focuses her attention on Studio Sing, Sing, Sing and the regular schedule of Estill Voice Training Workshops based around Pismo Beach, CA. She is also available to travel for those desiring a workshop in their location.

We use cookies to give you the best experience on our website. If you continue without changing your cookie settings, we assume that you consent to our use of cookies on this device. You can change your cookie settings at any time but if you do, you may lose some functionality on our website. More information can be found in our Privacy Policy and Cookies.Ok
Go to Top