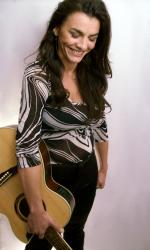 EFP: 2013
EMT: 2014
E-mail:
info@paolagoso.it
Specialties: Singing, Speaking
Languages: Italian, English, French
Phone:
+393809010992
Website: https://scuoladicanto.wordpress.com/evts-voicecraft-2/
ABOUT MEPaola Goso is a versatile and expert singer, vocalist and singing teacher. She was born in Milan, where she lives and works.As a teenager, she began her singing studies at the CPM Music Institute, with Tiziana Ghiglioni. The closeness to the great Italian jazz interpreter introduces her to a musical genre previously unknown to her and which she falls in love with.In 1994 she participated for the first time in the Voicecraft course, A 5-days Course in Voice Quality Control, during which she met the American researcher Jo Estill, and began to familiarize herself with the exercises, noting great improvements in the singing voice.Subsequently she assiduously follows the courses that Jo Estill holds in Italy, both 1st and 2nd level. She studied the technique for three years with Elisa Turla, Jo Estill's Italian assistant. In 1995 She graduated from the Civic Jazz School directed by Franco Cerri and Enrico Intra in jazz singing, theory and solfeggio, functional harmony and history and aesthetics of jazz.In 1998 she attended the course for teachers, in Lastra Signa (Fi).In 1999 he took part in the summer course of the Berklee College of Music in Boston which takes place in Umbria.Her specialization in vocal technique also continues with the teachers Flavia Vallega and Sabina Macculi, Opera singers.Between 1999 and 2012 her concert commitments and academic studies keep her very busy and it will therefore only be in 2013 in 2014 that she will be able to complete her Estill studies and become an EMT.She graduated in Theory and Solfeggio at the Nicolini Conservatory of Piacenza in 2011.October 2011 follows the VIII International Course of Phoniatrics and Speech Therapy.2014 Master Class with Bob Stoloff.May 2015 Estill National Conference.Between 2015 and 2016 he periodically attends in-depth lessons in London on the style of Musical theater.Between 2015 and 2019 he attended several Masterclasses and seminars on harmonic singing.The specialization and insights into voice teaching continue and the PROEL-EN, Elastic Proprioceptive Method, has just begun with the team of Professor Alfonso Borragan.PERFORMERShe has been absent from the stage for a few years, and she is dedicating herself to teaching and perfecting her teaching, and to new projects in the Studio.Her versatility allows it to range from pop music to blues to jazz. She has collaborated on the musical projects of numerous groups as a solo singer and vocalist. Her long stay in the musical field has seen her engage in Live experiences with different musical contexts from the duo, to the group, to the Big Band. She as been a singer of musical theater and Italian popular music on cruise ships.From 1994 to 2015, she carried out concert activities as a solo singer and Back Vocal, in very different contexts; chorister on tour for big concerts, jazz solo singer, shows on cruise ships, and for shows and big events. In 2001 She is the backing vocalist of Sungift, supporter of the Vasco Rossi, Deep Purple and Bob Gheldoff Tour. In 2002 She performed for the “New York Reneissance” event at Palazzo Reale in Milan, which saw the participation of musicians such as Roberto Sellani, Paolo Tomelleri, Gaetano Liguori, and was reviewed in the Corriere della Sera by the Music critic Vittorio Franchini. She is a session worker in the studio (Lagostina, Chateax Monfort etc.), and for independent productions.TEACHING EXPERIENCEShe has been working as a singing and vocal technique teacher since 1995.He has collaborated for years with the doctor, speech therapist, S. Buscemi and with F. Calvi, and still makes use of the collaboration of speech therapists in the prevention of dysphonies.She currently works as a freelancer, and She is an associate professor of the CPM Music Institute, for the CPM educational project, and as a Vocal Coach prepares students for entry into the Academies of Music, Casting and Competitions; she still collaborates with the Donizetti Civic School of Music.PAST TEACHING EXPERIENCES:Ossona Guitar Academy CEP Permanent Education Center MAS Music Art & Shows MUSICTIME, ISME TEMA Music Association DNA Dance Academy Network Civico Itituto Musicale Donizetti (since 2002)Civic Institute of Music G. Puccini Academy of Modern Music