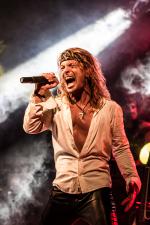 EMT: 2009
E-mail:
giulio.garghentini@gmail.com
Specialties: Singing
Languages: Italian, English
Phone:
+393339643265
Website: http://www.giuliogarghentini.com/
Giulio is a professional singer and writer of music and lyrics. He studied singing with many important teachers and was introduced to EVTS by Elisa Turlà. Giulio is teacher at the school Modern Music Institute of Lodi-Piacenza c/o TANZAN MUSIC ACADEMY in Italy. In the following years, he took part in lots of live perfomances with many bands: Mantra (rock band), Darkfire (Hard-rock band that had a good success also in the Japanese market), Soul’s Silence (piano-voice duet), ex Beat funk (funky-jazz band). In 2003, Giulio knew a new “world”: the theatre, and he played the role of Jesus in the JCS recently realized. In 2007, Giulio joined the “JamforLive world” and he became the singer of “Dream Company” (Tribute to Bon Jovi) and "Revolution" (Guns n' Roses Tribute band) Giulio is having a lot of success in Italy and even in Europe playing in the most important live clubs. The first solo album of Giulio Garghentini "BELIEVE" is produced by Mario Percudani for the record label TANZAN MUSIC. In recent years Giulio has partecipated with his voice in many important productions.