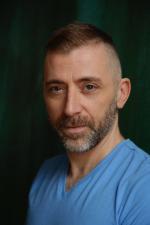 Fluent in Italian, English and German, Sandro Di Lucia is a singer, actor and singing teacher as well as a fully qualified Estill Master Trainer. His vocal style and technique range from pop, musical,theatre through to classical.

Sandro’s stage credits range from musicals, production shows, concerts, cruise ships and television advertisements, having worked extensively in Italy, England, France, Cyprus and Germany. Initially training at the Bernstein School of Musical Theatre in Bologna where he earned his first professional Diploma in Musical Theatre, he later studied the bel canto technique under various opera singers in Italy. After this Sandro move to London where he studied at the Mountview School of Performing Arts moving to do his Masters in Musical Theatre at the Royal Academy of Music under the guidance of Mary Hammond.Initially studying the Estill Voice Model at the Royal Academy of Music in 1999, Sandro studied for another 4 years to become an Estill Master Trainer completing his course in 2019 having worked with the likes of Ann- Marie Speed, Paul Farrington, Helga Westmark, Dorte Hyldstrup. His commitment to his vocal skills and the Estill Voice Model, has allowed Sandro to teach successfully for the last decade in Hamburg at a variety of different musical schools as well as in his own private studio.

Sandro is currently working as a Singing Teacher for the University of Lüneburg in Germany, as well as for the Norddeutsche Musical Academy in Hamburg.