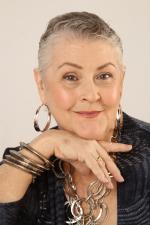 EMT: 2004
E-mail:
acronvich@comcast.net
Specialties: Singing
Languages: English
Anne Cronvich Voice Studio
9322 Mellenbrook Rd
Columbia
Maryland
21045
United States
Phone:
410-730-7185
After graduating with a Bachelors Degree in Visual and Performing Arts from the University of Maryland in Baltimore County, Anne began teaching voice in the usual, traditional sense for 27 years. Her first love has always been Musical Theatre and when she discovered Jo Estill and her work on belting she had to pursue it. In August of 2002, she passed her certification exam and proudly displays her certificate on the wall of her studio. She also has 18 credits in Speech pathology which have been a real boon to her teaching. Anne is also an actress, having studied with the late F. Cowles Strickland and Kenneth Baker at American University, Donn Murphy at Georgetown University and Gary Jay Williams at Catholic University. More recently, she has studied The Meisner Acting Technique. She brings a love of fun and a wonderful sense of humor to her lessons and now she brings EVTS to the studio, too.