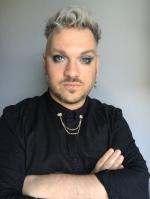 Currently, Jamie is a senior member of the singing teaching faculty at London Studio Centre on the BA (hons) Dance/Music Theatre programme. Previously, he was Head of Singing at CTA in West London on their One Year Musical Theatre Foundation programme. He has taught singing technique, acting through song and performance craft­­­­­­ at many leading UK drama schools such as East 15 Acting School, MTA and Mountview, major Dance/Music Theatre institutions: Urdang and Italia Conti, and music conservatoire Trinity Laban.

Jamie’s private clients/students have worked on Broadway, in the West End, on UK and International tours, at the National Theatre, as well as on film and TV. He also worked as Vocal Director/Arranger on a new musical project for Academy Award nominee John Cameron. Jamie has appeared on BBC One and CBBC as a vocal coach, and has been featured in The Stage, Women’s Health Magazine and Metro talking about the voice.

Jamie designed and co-founded The Singers Cabaret Workshop which provided unique workshops and training in the art of cabaret for professional performers.

Described as a “Cabaret Superstar” in Time Out, Jamie found his spiritual home as a cabaret and performance artist, he has performed internationally and at top London venues such as Hippodrome Casi­­no, Bush Theatre, Pigalle, Wilton’s Music Hall, Lauderdale House, Café de Paris, Hackney Empire and Royal Vauxhall Tavern. He has hosted shows in London’s West End at Her Majesty’s Theatre and Shaftesbury Theatre, as well as hosting cabaret showcase Cabaret Confidential every month for 9 years at Leicester Square Theatre, Pizza On The Park and The Pheasantry.

Most recently, Jamie developed and performed his own show which was performed at Bush Theatre and Barbican Centre.

Jamie was mentored as an Estill Master Teacher by Anne-Marie Speed.