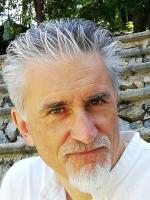 Professional vocalist and jazz composer, in 2001 I was ranked 5th among the new Italian talents at Top Jazz Referendum (by “Musica Jazz” Magazine) and then voted among the best 10 Italian male jazz voices (Jazzit Award 2010). Vocal coach and expert on vocal improvisation.

I studied classic and jazz guitar and harmony. Electronic Engineering (1992), I took a degree as composer, arranger and programmer at the "Scuola di Alto Perfezionamento Musicale di Saluzzo" in 1995. In the same year I met Jo Estill and her singing method “VoiceCraft”. Since then I followed her in all the Italian workshops and private lessons for a short period in California. I was certified by her in the late 1990s.

I studied scat singing, reworking my guitar jazz studies and thanks to Bob Stoloff’s teaching method.

In June 2005, I placed second at the International Massimo Urbani Award.

In 2007 and 2013 I attended “Voci Audaci” workshops with Rhiannon, Joey Blake and David Worm (historical Bobby McFerrin choristers in his Voicestra) and I attended the “All The Way In 2014” workshop with Rhiannon in Hawaii, Holland and Rome, with 18 selected vocalist coming from all over the world.

I have several activities as vocal coach, scientific researcher on vocal potential and as a vocalist in studios and on stage in Italy, Europe and USA, collaborating with high level international musicians, in different groups, from vocal solo to bigger bands and vocal groups.

Since 2001 I recorded four cds, all strongly influenced by jazz and voice improvisation. You can find some reviews here.

It has been said: "His Jazz scat is as competent as any other I‘ve heard and for those interested in an international take on straight ahead Jazz vocals, this disc might be worth check out." Troy Collins-Cadence-USA (From the review of my cd "Sono un Bluff" - Abeat 2005).

In the last years, I concentrated my studies and research on using the voice in a more instrumental way. I realized "The Orchestra in the Mouth" a special workshop in which I teach how to use the voice as a trumpet, flute, violin, cello, harmonica, distorted guitar, bass and percussions (watch the video). Among others, I have a vocal solo project in which I improvise with a looper and electronics, using my voice as in a real band. Watch my YouTube channel