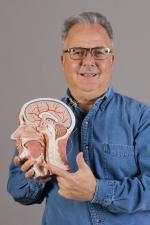 Although trained as a concert pianist, "Doctor Steve" has chosen to make his career in musical theatre. Doctoral research in the music of George Gershwin enabled him, in a scholarly setting, to bridge the gap between the disciplines of music and theatre. His career as a pianist and accompanist in a concert setting has led to performances in numerous locations in the United States and Europe. He has accompanied well-known performers like Klea Blackhurst in her award-winning one-woman revue, "Everything the Traffic Will Allow: The Songs and Sass of Ethel Merman" and Tony Award winner Alice Ripley in concert.Musical theatre has been his primary passion, and to that end, Dr. Steve has been a part of nearly 100 theatrical productions as musical director, conductor, pianist, and vocal arranger. He has worked for companies that have taken him to perform in 12 countries on 4 continents. In the U.S.A. he has worked for regional theatres that include Flat Rock Playhouse, Bucks County Playhouse, and Hampton Playhouse. He has been a part of a number of successful world- and regional- premiere productions, among them "Pageant" (Michael Rice et al) and "Gilligan's Island: The Musical (Sherwood & Lloyd Schwartz and Laurence Juber). Certificates of esteem and distinguished service from national and international organizations and governments attest to his contributions to musical theatre.Steve began working with Jo Estill in 1988. He brings the Estill Model not only to the UCF musical theatre curriculum, but to professional voice users worldwide. He continues to lead energetic workshops in the U.K., Australia, the Caribbean and Europe. He presented a landmark paper, "Three-Tier Voice Training for Musical Theatre: A Non-Traditional Approach," at the First World Voice Congress in Oporto, Portugal, and was also the first transatlantic faculty to teach at the Oxenfoord International Summer Music School in St. Andrews, Scotland. In 2005 and again in 2007, he was a keynote speaker for the Association of Teachers of Singing (AOTOS) while on a lecture tour of Sydney, Melbourne, and Adelaide, Australia. He was a visiting artist/teacher in residence at the Sydney Conservatorium of Music in 2009. He co-presented the paper "A Design for Collaborative Voice Assessment, Rehabilitation, and Training" at the 6th Pan-European Voice Conference, The Royal Academy of Music, in London, England. In 2011, 2013, and 2018, Dr. Chicurel-Stein presented workshops in Artistry in Musical Theatre at EÒLIA - Escola Superior d'Art Dramàtic in Barcelona, Spain. As well, the UCF Department of Theatre was highlighted in his paper, Teaching Levels I and II in a University 15-week Semester Setting, at the Estill International World Voice Symposium V in Rome, Italy and again in a paper presented at Harvard University for the EVI World Symposium VI. In 2016, Dr. Chicurel-Stein's was invited to Indonesia, where, together with Dr. Jeremy Hunt (UCF Dept. of Music), he presented recitals of Western and new Indonesian music as well as led master classes for university and conservatory music students. Most recently (2018), Dr. Chicurel-Stein was the keynote speaker at "Estill in Spain" in Barcelona.Dr. Chicurel-Stein is the co-author of Geography of the Voice: "Anatomy of an Adam's Apple as well as Score: Music Theory for Musical Theatre (Scarecrow Press). He retired from The University of Central Florida in 2021 and was awarded Professor Emeritus status. He has Bachelors, Masters, and Doctor of Musical Arts degrees in piano performance from Mars Hill College, The Peabody Conservatory of Music/Johns Hopkins University, and the University of Kentucky respectively.In 2013, Dr. Chicurel-Stein was awarded the Lifetime Achievement Award from Estill Voice International.