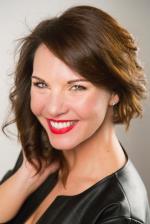 She is an Italian singer, actress and teacher of singing, specialising in Musical Theatre.She graduated as an actor/singer/dancer from the Bernstein School of Musical Theater in Bologna.She is also a trained classical singer and she holds the title of Certified Master Teacher in the Estill Model studying with Anne-Marie Speed (CCI - Royal Academy of London) and now she is one of her principal assistants in Europe.She performed as vocalist and musical theater performer in various parts of the world (California, Brazil , Spain, Germany, Austria, Slovenia, Serbia, Italy)She has played in the musicals “Into the woods”, “Sweeney Todd”, “Parade”, “Ragtime”, “Urinetown”, “Beggar's Holiday”, “Nine”; as well as in projects "Musical Starts”, “Christmas Starts”, “On Air-the musical” , “Maximilian” and she worked in in the masterpiece “Elisabeth” and “Joseph and the Amazing Technicolor Dreamcoat” in the European Tour as vocal coach.She is a recent guest artist in the popular concert "Gran Galà of Operetta e and Musical" accompanied by the Philharmonic Orchestra of the Teatro Verdi in Trieste.In 2012, she opened the Michel Telós concert-live in San Paolo (Brazil).Since 2010 she is working with Sony Productions in the pedagogical project "Cantajuego” (Madrid), and in 2009 she worked as a performer in the Aida Show Ensemble with the company SeeLive Tivoli (Hamburg) around Europe.Recently she performed at Novi Sad Festival with Velenje Orchestra and at Expo 2015, and from 2014 she is playing in the role of Marlene Dietrich in the recital ”MarlenEdith“. In the summer 2016 she has just been performing the main role in the musical “Titanic” by Maury Yeston in the TSW Production in Swiss also in german.Currently, in addition to her concert activities, she is a Teacher of Vocal Technique at the BSMT which is the most important Musical Theater Academy in Italy and EVT Master referent in London and Berlin.