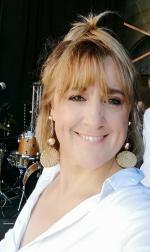 Yolanda Sánchez Igal is a professional singer and singing teacher for more than 15 years.

She studied the Estill Voice method in Eolia Voice Center, Interpretation and Dance. She was a student of Paul Farrington and Viv Manning. EMT since 2012.

2006 Musictherapy Mayeusis Foundation of the Superior Conservatory of Vigo (España).

2014 Course "The forced use of the voice" of the Department of Voice Pathology of the  Hospital de Navarra.

She has worked as a singing teacher and vocal coach in music schools, theater companies and schools, as well as in cultural centers conducting workshops, seminars and master classes. She has been the choral conductor and vocal coach in Barcelona and Pamplona such as Tempus Musici Chamber Choir, Dmusica Gospel Choir and Alaikapela. Together with Alizia Romero, she has created the Navarra Gospel School. In the near future a Gospel workshop with Bazil Meade from the London Community Gospel Choir for the creation of the Navarra Gospel Experience Choir.

(On line) with Dorte Hyldstrup and Isabelle Marx 2020

(On line) with Marcello Zempt and Isabelle Marx 2021

(On line) with Dorte Hyldstrup and Isabelle Marx 2021

(On line) with Alizia Romero August 2022