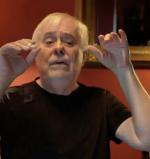 Montana-born Thomas Clark holds degrees in German and French and was Fulbright Scholar to both Germany and France, studying at the University of Munich and teaching English at a French lycée in Metz, France. He taught German as a teaching assistant at the University of California, Berkeley before embarking on a singing career performing major operatic roles in San Francisco. Beginning as a baritone, he gradually transitioned to the dramatic/Heldentenor repertoire with great success. His first major tenor role was that of Prince Hal in Plump Jack opposite the composer, Gordon Getty, as Falstaff. Later performances included Siegmund in die Walküre, Loge in das Rheingold, Bacchus in Ariadne auf Naxos, Dick Johnson in La Fanciulla del West, Florestan in Fidelio, Cavaradossi in Tosca, Calaf in Turandot and Canio in I Pagliacci. From earliest childhood, Clark sang and played the piano, developing a keen interest in singing and performing. His love of opera led him to develop a passion for vocal theories and pedagogies eventually leading him to Peter Gregg, a coach who had worked extensively with legendary Italian tenor Mario del Monaco. Gregg's iconoclastic vocal technique from del Monaco allowed Clark to finally make the switch from baritone to dramatic tenor. Clark finds the Estill Voice Model a convincing link to that very Italian theatrical voice tradition.